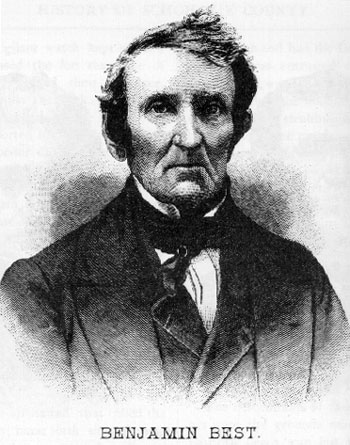 Mr. Benjamin Best was for many years one of the leading business men of the County. He was born in Columbia county, N. Y., on the 16th of February, 1785, and was a son of Jacob Best, who, together with two brothers, emigrated from Germany. One of the brothers remained in Columbia county; another settled in western New York, while Jacob located in Schoharie.

The subject of this sketch early decided upon an education, and embraced every opportunity to improve himself, and prepare for a useful and active business life. When but a young man he formed an acquaintance with many of the leading public men of the day, among whom was Governor Morgan Lewis, who appointed him his sole agent in the superintendence of his landed property in the County, which position he held forty years. He was also receiving agent of the Alexander property, the same term of years, which covered the exciting Anti-Rent days.

As proof of his sagacity as a business man, and honor as a gentleman, he engineered the business relating to the estates through without trouble or incurring the enmity of the landlords or tenants. He was a person of strict integrity, great precision of character, and commanded universal respect. At the age of forty he married Katy, daughter of Timothy Murphy, and settled upon the farm now occupied by Abram Spickerman, where he resided until the time of his decease.

Mr. Best was a staunch Democrat, and held the office of Justice of the Peace, fifteen successive years, and rejected other positions of public trust proffered him. Among the many political friends and workers in the interest of Governor Bouck and his promotion, none were more firm and enthusiastic than Mr. Best.